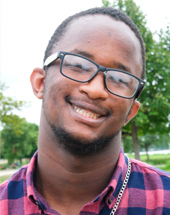 J’mere is a very kind, helpful, and creative teen. Some of his hobbies include arts & crafts, basketball, and football. Two positions he enjoys playing is a quarterback in football and point guard in basketball. J’mere likes the teamwork involved in playing sports. He not only enjoys playing sports but watching them as well. He is a huge fan of the Philadelphia Eagles. J’mere is helpful around the house. He especially enjoys helping his current resource parent renovate houses to sell, as well as painting and cutting the grass. When asked about his hopes and dreams, J’mere expressed interest in working as a landscaper and living in the city someday.

J’mere is looking forward to having a forever family of his own with pets. He wants a family that attends church. He would do best in a home with no other children. Maintaining a relationship with his siblings as well as his friends and current resource parent is very important to him.

Ready to take the next step?